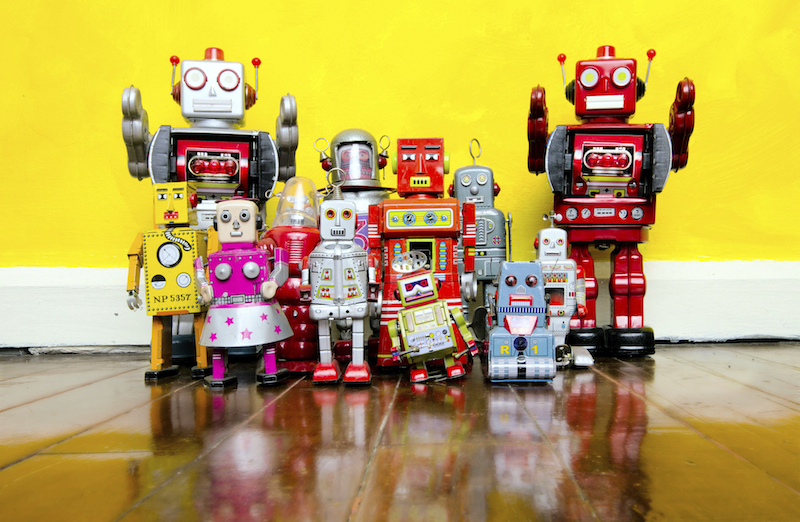 Industry 4.0: Robots, AI and the Future of Jobs

Robots, Artificial Intelligence and industrial automation are challenging the future of jobs. Industry 4.0, the Fourth Industrial Revolution, has been discussed by the world’s leaders at the World Economic Forum last week. But is smart software like zistemo necessarily bad news? Intelligent programs and machines could give us back the most valuable resource we have: time. More time for good, fulfilling work.

It’s 1962. Agent 007 is chasing Dr. No – and Miss Moneypenny types, makes phone calls and generally administers the whole messy operation from her desk. Settling all those bills, travel expenses and all the charges due to damage to property I had to handle. I tell you, the final audit that year was a nightmare.

Today even artsy freelancers struggling to make a living, have their very own Miss Moneypenny literally at their fingertips. Wherever they are, whenever they need her, zistemo is there to help. Marvelous, no? But the automation of administration could kill a whole profession. Typists have become extinct and secretaries are not as high in demand as they once were. Typing, calculating and sending out an invoice: smart software can do it all much faster and cheaper. At the same time, new professions and industries have been born. Data analysts, information technicians and help desk assistants are a big part of today’s workforce.

The Industry 4.0 or the Fourth Industrial Revolution, as this trend to intelligent industrial automation has been called, is good news and bad news. Look at it this way: If a machine can do your job, this job might not be suitable and dignifying for a human being. Let’s be honest: Would you choose – and enjoy – to work at an assembly line every day, 9 to 5? Probably not – or you would not be here, working your fanny off as a freelancer or small business owner. Your work schedule might be overwhelming and time is probably scarce, but there is one thing you don’t have to fear: monotony.

Maybe there are individuals out there who find the assembly line very suitable and fulfilling. Good for them. But the vast majority of people only do this kind of work to earn money. Which is the same as earning their living. If robots take away these jobs, as undignifying as they are, people won’t be able to earn their living anymore. And this can’t be good for anyone. This is why the smart people at the World Economic Forum discussed a very interesting proposition: the universal basic income. In this scenario, every human being will get a basic income just for being a human. Worth a thought, isn’t it? My new home country Switzerland will even be voting on this in a few months.

Machines have taken over human jobs for centuries. We have survived three of these industrial revolutions to date. The first Industrial Revolution took place in the second half of the 18th century, where machines and technical innovations have replaced humans in agriculture and production. This divided society into workers and contractors. Electrical innovations enabled an immense increase in production around 1870 and thus replaced handcraft and artisanry in the Second Industrial Revolution. A century later, around 1970, computers and chip-technologies changed the way we communicate and produce things fundamentally: the Third Revolution had arrived.

Today, these automations have become intelligent and might pose a real threat to the human workforce. Robots and Artificial Intelligence are being used in different sectors. Robot hoovers make many people’s lives easier. In Japan, care robots are being used in nursing homes. Google is working on the self-driving car – and even creatives can be replaced by software intelligent enough to write persuasive copy. Last but not least, zistemo is your accounting, secretary and client manager all in one.

Where does that leave us? One thing is for sure: automations means more time. Time to live; time to create value; to think about what humans are and what human dignity means. If we can leave the legwork to a machine, we can concentrate on more important matters. A care robot will be able to imitate touch – but it will never be as intuitive as a human being. The self-driving car gives you time to sit back relax and think your thoughts. If the headline is being generated by software, the copywriter can concentrate on research and creation of valuable content. This is only possible when robots are not merely replacing humans – but when we work together. I believe that the cost-benefit calculation of automation has to be done sustainably and not profit-oriented. Only then our society will profit from this revolution.

In Davos, not very far from my desk, the world’s leaders have questioned the future of jobs. They did not find an answer yet. I say: the future of work is here. And it will change our society. zistemo is taking a lead. Join her!

The Future of Work